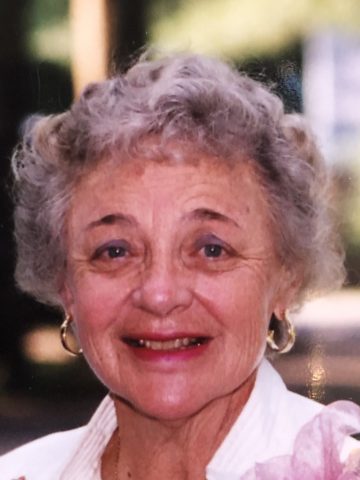 Caroline Cynthea Braly Taylor was born on February 8, 1931, in Chattanooga, Tennessee. She passed away on April 13, 2020. Her parents were Thomas Edward Braly and Mary Hitzfeld Braly, and she had two brothers and one sister, Thomas, Jr., Lewis, and Judith, whom have all passed. Cynthea was married to Richard Douglas Taylor, Sr., and together they had four children, Richard, Jr. (Lisa), Geoffrey, Scott (Marilyn), and Mary Bernasconi (Edo). Richard, Sr. passed away in 2007, and all four children have survived their mother.
Cynthea was raised in Chattanooga where she attended Girls Preparatory School, then Vanderbilt University in Nashville. It was there she met her husband, Richard. Cynthea graduated Vanderbilt with a degree in business, then worked in Chattanooga for the Tennessee Valley Authority as a cartographer, analyzing WW-II aerial photographs. Her childhood exposed her, through her mother, to horticulture, and she loved growing flowers and vegetables and was adept at dried flower arrangements. She served as the President of the Tennessee Garden Club. As a child she was allowed to own a horse, whose name was “Red”, and she shared many fond memories of him. At the “big house” in Chattanooga, named Wrenhaven, she had a stable and track built for her horse. As an adult, her fondness for animals flourished, and we had many family pets, including her last beloved dog, Belle.
Cynthea and her husband, Dick, settled in Nashville, after spending two years in Sasebo, Japan. Dick practiced law, and Cynthea was a fulltime mother of two children, and soon two more. She was a fine mother, caring and compassionate, and kept a beautiful house, spending time preparing meals, driving carpool for her children, caring for her husband and children, and of course cutting the grass and growing vegetables. She was a long-term member of the Davidson County Bar Auxiliary and numerous local groups and charity organizations. She was the proud parent of three boys who graduated from Father Ryan High School, and a daughter who graduated from St. Cecilia High School.
Cynthea’s mother was widowed in 1973, and continued to live alone at Wrenhaven, in Chattanooga. She lived to the age of 103 years. For the last decade of her mother’s life, Cynthea drove to Chattanooga nearly every week and would spend a few days with her mother. Cynthea made hundreds of trips to Chattanooga. Such was her nature.
In 1989, Cynthea became associated with Cumberland Heights Treatment Center on River Road, having dealt for a decade already with chemical dependence issues in her family. She became a regular attendee with Dick at weekly aftercare at Cumberland, frequently attending golf tournaments, fundraising activities, Christmas parties and the like, until Dick died in 2007. Together, Cynthea and Dick became very active in the recovering community, and for fifteen years regularly attended a meeting in Hillwood every Saturday evening, and again at 202 on Sunday mornings. Together, Cynthea and Dick worked for years as volunteers with the Alcohol and Drug Council of Middle Tennessee.
In their later years together, Dick and Cynthea began to travel together, and took trips to Europe where they toured much of the continent, particularly enjoying Italy and Switzerland. They took several trips to Utah, as well, to visit Mary and her husband, Edo. Cynthea and Dick both learned to snow ski in their late 50s, which was an adventure in itself!
Devastated by Dick’s passing, Cynthea continued her life in West Nashville. Physical ailments became a part of her life, and eventually she moved into the care of NHC, moving finally to the newest facility on Highway 100, where she was the first resident admitted. Over the last several years, the staff at NHC provided her with wonderful attention and became not only her primary caregivers, but also her
extended family. Cynthea and the Taylor family is, and will always, forever grateful. For the last decade of her life, Lisa Taylor has been a steady companion to Cynthea, overseeing the myriad of issues of her health care and finances.
Cynthea was blessed with many grandchildren in her later years, all of whom have survived her. She was so proud of them all, including Rebecca Held, Kathryn Held, Natalie Nickerson (Robert), Scotty Kellam (Chienny), Courtnie Croley (Jon), Braly Taylor, Jennifer Taylor, Morgan Taylor, Michael Taylor, Mackenzie Youd, Morgan Youd, Jordan Brownlee, and Sofia Marie Bernasconi, who fondly called her “Grandmom Sleeping Tiger”. Cynthea has numerous great grandchildren as well, including frequent local visitor, James Randall Held.
Throughout her life, Cynthea was a beautiful and caring spirit. Her memory for details, particularly late in her life, was remarkable. Not only did she remember everyone’s phone numbers, she entertained us by recounting various stories and histories of her own, and those of her friends. Cynthea was always intensely interested in the goings-on of her family, particularly her grandchildren. She had a special love and affection for her “second daughter”, Anne Richter Snyder, and her husband Kurt. Cynthea was blessed with a large extended family who she continued to talk to, and visit with, throughout the years. She was also a good friend to many, including childhood friends from GPS and Vanderbilt she regularly communicated with, as well as the many friends she made through Dick’s associations and her involvement in local charity and recovery communities. She was talented and loving of all around her, and her passing from our world will leave a great vacancy, overflowing with the many memories of her.
Gifts in her memory may be given to Cumberland Heights, located in Nashville, Tennessee, or to Camp Marymount, in Fairview, Tennessee. Cynthea will be buried in a private, family ceremony in Calvary Cemetery, joined again with her husband Dick, on Friday, April 17, 2020. A celebration of her life and memories will be announced as soon as is practicable under prevailing circumstances.
As Mom would fondly say, “Now let, me ask you one more thing…”.
“We love you 10,000 times more.”