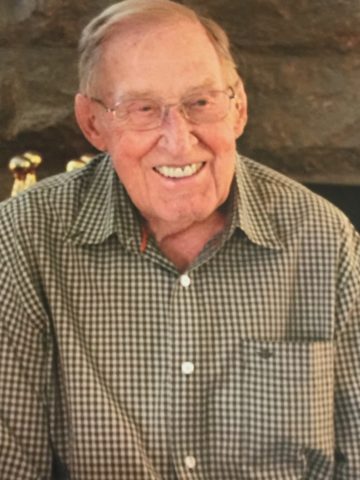 CHARLES BENJAMIN HEMMER, born November 29, 1926 in Holland, Indiana to Herbert and Anna Hemmer.  Graduated from Dale, Indiana High School in 1945 and served two years in the U.S. Army.  Spent a year in Occupation Forces in Japan, was recalled to service in 1950 and spent 16 months in Percy Jones Army Hospital in Battle Creek, Michigan.  For the last 25 years, he has lived between Nashville, Goodlettsville and Phoenix, AZ.

He worked for General Electric for 17 years, and then started Sharpcut Inc., a tooling company, in Nashville, from 1967 to 1992.  Attended Evansville College for two years and taught night classes in tool and die apprentice for eight years.  He also taught machine tool classes at Gateway Community College in Phoenix, AZ for two years.

Charles had a second career renovating and restoring old homes, both in Nashville and Phoenix. He was an avid golfer and enjoyed woodworking, metal crafting and creating stained glass art.

Survived by wife, Mary Jean Hemmer; children, Philip and Christina; grandchildren and great-grandchildren.  Brother, Alfred Hemmer of Santa Clause, IN and many Nieces and Nephews.

8 Comments to Charles B. Hemmer