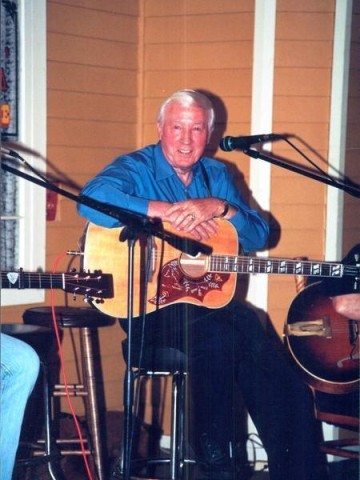 Departed on September 12, 2011 and resided in Nashville, TN

CHOATE, Donald William "Don Wayne" – age 78 of Nashville passed away surrounded by his family at home on September 12, 2011. Don Wayne was a member of The Song Writer Hall of Fame. One of his most famous songs was "Country Bumpkin" which was song of the year from 1974 through 1975. In his biography he wrote "Some of the happiest times of my childhood were spent listening to country music on the radio or playing records on an old wind-up Victrola. Some of my favorite singers then were Eddie Arnold, Ernest Tubb, and Roy Acuff. One summer day when I was about eleven years old, I was on my front porch pretending to play an old guitar someone had given me. The lady next door called me over and asked me if I knew "Rainbow at Midnight" by Ernest Tubb. I said yes, but I don't know if I can remember all the words. She went in the house and came out with an Ernest Tubb Song Folio, and we sat there having a great time singing a lot of those old Ernest Tubb hits. I suppose that was the beginning of my dream of someday doing something in country music. I think 'Country Bumpkin' is by far my best song and it will always be special cause "it" came along and picked me up at a very low point in my songwriting career. I love all my songs but I also feel a special affection for those recorded by the heroes I idolized as a youngster, among those are 'Don't Water Down the Bad News' by Ernest Tubb, 'What in Her World Did I Do' by Eddy Arnold and 'MacArthurs Hand' by Tex Ritter". Survived by his loving devoted wife of 56 years, Emily Sue Bennett Choate; children, Donna Choate Howell and Dwayne Choate Fiancé Donna Davis; grandchildren, Gregory Collins Fiancé Shannon Capps, Crystal Choate Kelly Max, Lani Choate and Emmie Choate; great-grandchildren, Connor Kelly, Cassie Kelly, Colin Kelly, Ryan Collins and Luke Collins. A Life Celebration will be held 2:30pm Thursday at Harpeth Hills Funeral Home with burial to follow at Harpeth Hills Memory Gardens. Visitation will be 4:00pm – 8:00pm Wednesday at HARPETH HILLS FUNERAL HOME, 9090 Hwy 100, Nashville, TN 615-646-9292. www.afamilylegacy.com