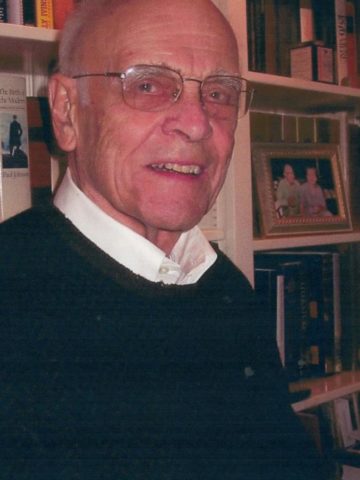 David Andrew Grimes- age 93, died June 15, 2020, in Nashville, TN. He was the son of John and Irma Grimes of Wheeling, WV.
He graduated from the Linsley School in Wheeling in 1944, and served in World War II as a hospital corpsman in the U.S. Navy. He graduated from Washington & Jefferson College in Washington, PA, in 1949 and from the University of Pittsburgh School of Public Health in 1953.
As a hospital administrator, he served an internship in hospital administration at Vanderbilt University Hospital in 1952-53; as an administrative assistant 1953-55; and assistant director in 1960-67. He was chief executive officer in the following hospitals:
*Greene County Memorial in Waynesburg, PA 1955-60
*University of Mississippi Medical Center, in Jackson, MS 1967-75;
*Middlesex General Hospital (now Robert Wood Johnson University Hospital) in New Brunswick, NJ 1975-82.
On his return to Nashville in 1983, he served as an administrator in the Tennessee State Department of Health, retiring in 1996.
He was a long and faithful member of Christ Church Cathedral, where he was a former vestryman and tour guide of church art and architecture.
He is survived by his wife of 66 years, Betty Mosby Grimes.
He is also survived by his four daughters, three sons in law, 11 grandchildren and 3 great grandchildren: Julie Grimes Dolci, Elizabeth Grimes Triggs and Austin Triggs; Marie Grimes Gerrity and Peter Gerrity; Anna Bauer Grimes and Thomas Noser.
His grandchildren are: Jack Dolci, Chris Dolci, Elizabeth Triggs Tipton, Andrew Triggs, Peter Gerrity, Henry Gerrity, Lucy Gerrity, Charlie Gerrity; Mary Frances Noser, Joe Noser and Ted Noser.
He is survived also by three great grandchildren: Louise Tipton, Charlie Tipton, and Lane Gerrity.
He was predeceased by his sister, Judy Holloway, and brother, Jack Grimes, both of Wheeling and by his son-in-law, Kirk Dolci of Kinnelon, NJ.
There will be a family service of committal in the columbarium at Christ Church Cathedral this week, and a memorial service at the church at a later date.
Memorial contributions may be made to the Linsley School, 60 Knox Lane, Wheeling, WV 26003 or to Christ Church Cathedral, 900 Broadway, Nashville, TN.