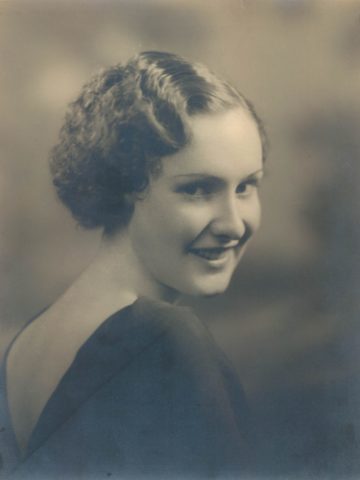 Mrs. Barnes is survived by her children, Robert Barnes of Nashville, TN, and Nancy (Matt) Reed of Smyrna, TN, and grandchildren Shawn Barnes and Dawn (Alan) Watts, both of Murfreesboro, TN.

Mrs. Barnes was an active member of West Nashville Cumberland Presbyterian Church, and for many years taught Sunday School and Vacation Bible school to her favorite age group, the pre-schoolers.

A mother and homemaker following her marriage, Ms. Barnes was a creative cook and could work wonders with humble ingredients.  Her homemade rolls were legendary, and she could be forgiven for her (repeatedly) mistaken belief that two full pans of those rolls would be enough to feed a small holiday gathering.  She was an avid reader, especially of Zane Grey westerns, and was a serious college football fan.  She enjoyed rooting for the Vanderbilt Commodores and UT Volunteers, and in her divided household she wisely refused to choose sides when they played each other.

An early pioneer in the upcycling crafting movement, Mrs. Barnes was an avid crafter and, where others saw trash or the mundane, she saw a creative opportunity.  Family and friends looked forward to Christmastime each year, when they were sure to receive a lovingly crafted gift.  The creative pursuit of which she was most passionate was poetry, and she authored hundreds of poems throughout her life, one of which was performed by Hawaiian singer Larry Rivera for Coco Palms Records.  Accompanied by her life and travel partner Frank, she took her first plane flight in 1981 to Hawaii, and made numerous trips back to the islands over the years with close family friends Robert and Judy Roberson.  When not traveling to tropical or far flung places with the Robersons, she and Frank enjoyed camping, especially in the Smoky Mountains.  She was of the firm belief that Cades Cove in the Smokies was the most beautiful place on earth.

In the last years of her life, she came to depend on her grandson Shawn's weekly visits and assistance, which helped her to live independently until her final illness.  Her neighbors Tsegaye Arku and Zaid Tewolde also provided assistance with her care in recent years.  The family gives them, the staff and volunteers at Alive Hospice, and everyone else who cared for Mrs. Barnes their greatest gratitude.