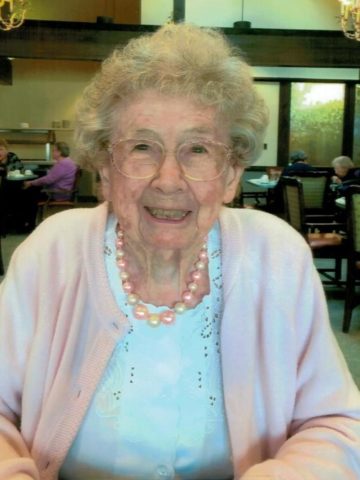 Departed on February 20, 2020 and resided in Bernie, Indiana

Florence Emma Alberta Heitfeld Schultz, 98, was born on December 19, 1921
in Fairmont, Minnesota to Ernest and Elizabeth (Reim) Heitfeld and grew up
in Sauk Rapids, MN, where she graduated from high school. She had 4
sisters who preceded her in death.

Florence met and married Lester W. Schultz, who was a radio instructor
with the National School of Electronics, Minneapolis, MN. They were
married in Breckinridge, OK, on November 22, 1941, and lived in Garber,
OK, where she worked as secretary for a local attorney.

Lester was deployed to the South Pacific during WWII as an Army radar
operator when his ship, the SS Antoine Saugrain, was torpedoed while in a
convoy to Leyte, Philippine Islands. During the years that Lester was
away at war, Florence raised her two infant daughters alone with the help
of her mother-in-law with long periods of not knowing the fate of her
husband.

After the war, the couple became owner-operators of the Roekle Bakery in
Garber, OK, and later moved to Nashville, TN, where Florence raised three
children, served as a PTA president, and was involved in her church and
the LWML. In the early 70â€™s, they were transferred to Green Bay, WI,
where she served as the LWML Northern Wisconsin District President, taught
Sunday School, and learned to swim. After Lesterâ€™s retirement, the
couple moved to Russellville, AK, and then to Fayetteville, GA. During
retirement, they travelled to all 50 states and many countries around the
world. Florence and Lester were married for 68 years when he passed away
at home in Georgia. Florence loved music, walking, swimming, gardening,
writing letters, crocheting, knitting, and spending time with friends and
family.

She is survived by a daughter, Karen (Kenneth) Krause of Decatur, IN, and
a son Warren (Linda) Schultz of Brooks, GA. One daughter, Linda (Robert)
Reed of Nashville , TN, preceded her in death.

Florence fell asleep and joined her family in heaven on February 20,
2020, at Swiss Village retirement community in Berne, IN, where she has
lived since 2014.