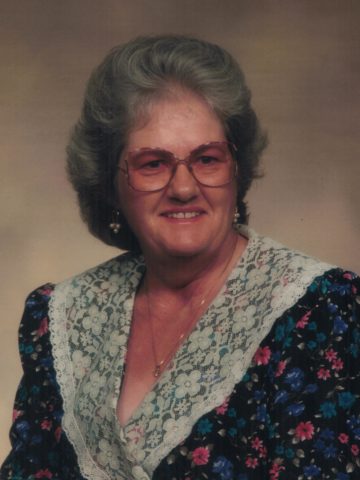 Grace Evelyn Adams of Ashland City, TN passed away at her home on Thursday, August 15, 2019 at the age of 83. She was born on April 22, 1936 to the late Russell Burgess Meadows and Ruby Johnson Meadows. She was the last surviving of several brothers and sisters.
Along with her parents and siblings, Grace is preceded in death by her husband of over 50 years, Granville S. Adams, Sr. and their daughter, Beth Adams.
She is survived by her children, Teresa Harris(Layman), Granville, Jr.(Judy), Donald Ray “D.R.” Adams, Gwen Cheatwood(DeWayne), Randy Adams, Kevin Adams(Teresa), and Scott Adams. Grace is also survived by twelve grandchildren and many great-grandchildren; her special grandson, Cory; baby girl, Kimberly; and a host of extended family members.
Grace was a member of Lillamay Church of Christ. She worked as a bus driver for Metro Schools and was a nanny for over 30 years. There were many things that were important to her in her life but her faith and family were number one. Some of the things she loved to do were sewing, quilting and crafting, working in her garden and tending to her flowers, and cooking and baking for her many friends and family. Some of Grace’s favorite places to go were Noah’s Ark in Pegram and when she was ready for a meal, Cracker Barrel and Carl’s Perfect Pig.
A Celebration of Life will be held on Monday, August 19, 2019 at West Harpeth Funeral Home in Nashville at 2:00pm with Bro. Michael Guy officiating. Visitation will be held on Sunday, August 18, from 4:00pm until 8:00pm and again on Monday from 10:00am until the hour of service. Grace will be laid to rest with her husband at Harpeth Hills Memory Gardens in Nashville. Her grandsons will serve as pallbearers.