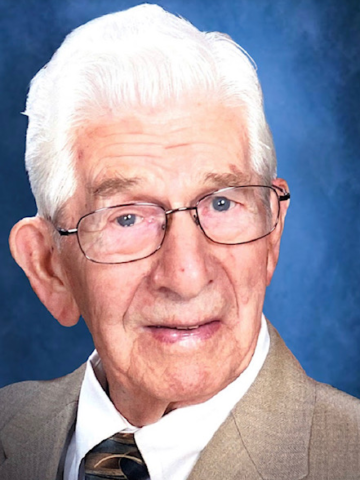 Jackson Meade Grizzard a resident at the Meadows Retirement Community died June 5th, 2020 at age 94 .  He passed peacefully with family by his side and went to be with his Heavenly Father.  Jack was born January 21, 1926 in Nashville, TN to the late William C. and Willie Mai Grizzard. He attended Cohn and Bellevue High Schools.  In 1943 at the age of 17 he enlisted in the US Army Air Corp Cadets and began his military service in 1944. He received his wings at Tyndall Field, Panama City, Florida in 1945.  Jack was sent to Germany as the first troops of occupation at two of Hitlers demined air bases.  Jack always felt honored to serve his great country and in 2009 was part of an Honor Flight network of surviving WWII Veterans to visit memorials in Washington, DC.

They were inseparable and loved their family.   Jack and Margie held a 70 year marriage celebration in 2019.  After his service discharge Jack attended David Lipscomb College and began working for Continental Grain Company.  He was first an accountant and then moved into transportation.  He worked 18 years for Continental Grain including 3 years in Mt. Vernon, Indiana where the family developed lifelong friendships.  In 1968 Jack was hired by Werthan Industries in Nashville, TN to start a private trucking fleet and became their transportation manager for 25 years.  He was a member and president of the Mid-South Shipping Association and an Administrator in the Nashville Traffic and Transportation Association.

Jack was an avid fisherman for 60 years and loved having fish dinners with family and friends in his large back yard patio. You might often find him on his tractor or riding his moped around the property with his dog Lucky.

On Nov. 16, 1948 at age 22 Jack accepted Jesus Christ as his Lord and Savior.  He started his Christian life teaching boys in Sunday School at First Southern Methodist Church and continued teaching for 65 years at various ages and classes.  He served as a Stewart and Deacon most all of his church life.  In recent years he faithfully attended and served at Bellevue Baptist Church.  Jack also volunteered to help at Horton Haven Christian Camp to further their ministry to children through Christ.  He loved his family and would  tell them the importance of his faith in Christ and his commitment to praying for each one of them by name.   Jack’s dedication to prayer was significant in shaping the faith of his family.  His memory will always live in our hearts. We want to thank especially the dedicated and compassionate staff at The Meadows who cared for him the last few weeks.

A private graveside service with Military Honors will be held on Wednesday, June 10, 2020 at Spring Hill Cemetery. A Celebration of his life will be held at a later date.