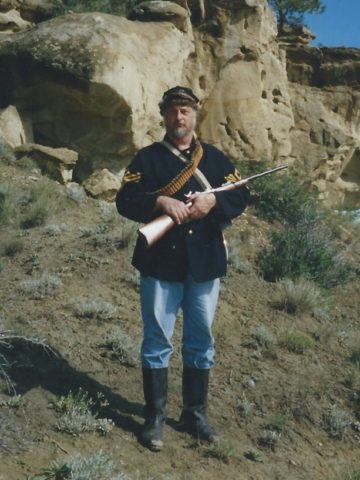 Departed on January 3, 2018 and resided in Nashville, TN

Mr. John R. Justice, age 65, of Nashville passed away Wednesday, January 3, 2018.  He was born August 15, 1952 in Nashville, TN to the late William Spire and Mary Katherine (Russell) Justice. John is also preceded in death by his brother, Bill Justice.

Being a military re-enactor was John's life. By the age of 14 it was the Civil War, then through the years he played everything he could from Rev. War to Vietnam (and also Kreig War). John loved the excitement and challenge of battle. He was a good leader and had a loyal following. He also enjoyed sitting by the campfire with friends, sometimes playing his concertina, or just being alone in the woods.  John was very intelligent and knowledgeable. He played the recorder, wrote poetry, and created works of art. He was a good-hearted and fun-loving man who was loyal to his friends. We will all miss him very much.

He is survived by his fiancé, Melissa McDonald and numerous friends.

Friends will gather for a time of remembrance and sharing at West Harpeth Funeral Home from 1 – 3 p.m., Saturday, January 27, 2018.