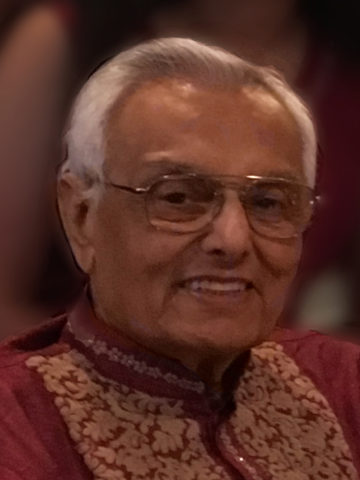 Departed on December 20, 2018 and resided in Nashville, TN

Kanai Lal Mukherjee passed away on December 20th, 2018 at age 89 in Nashville, TN.
Dr. Mukherjee was known by many names (Dadu, Thaku, Babujee, Meshomasai, Cyber Grandpa, Kanuda, Mastersaheb, Doiakaku, Room 222). He inspired countless others with his positive attitude, resilience, and contagious joy. He was still joking hours before his death.
Dr. Kanai Mukherjee was born in Benares, India. He grew up on the banks of the Ganges River, the eighth of eleven children. In his childhood he learned Hindu rituals by helping his blind father. He eventually went on to college, where he received a B.Sc. in Agriculture and a PhD in plant physiology. He married Bibha, a highly-educated trailblazing female professor.
In 1960 Dr. Muhkerjee accompanied his wife to the United States when she enrolled in a PhD program in Iowa. He returned to India for several years, then immigrated to the U.S. with his family in 1968. He held various faculty positions, eventually becoming a professor at Essex Community College, a Fulbright professor, and a respected priest in the Baltimore community. He authored several works on medical laboratory technology in developing nations. Later in life he started a nonprofit organization, Association of Grandparents of Indian Immigrants (www.agiivideo.com), devoted to spreading knowledge of Hinduism, Indian history and culture. His last project was a compilation of all major Bengali Hindu rituals with translations, audio recordings, and detailed explanations. His works have touched the lives of countless people across the globe.
He is preceded in death by his wife of 53 years, Bibha Mukherjee.
He is survived by his pride and joy: his three children, six grandchildren and one great-grandchild.
A service will be held on Sunday, December 23, 2018 at 11:00am at West Harpeth Funeral Home (6962 Charlotte Pike, Nashville, TN 37209) in Nashville, TN. Visiting hours will also be on Sunday, December 23 from 9:00am to 11:00am. The family is collecting donations in lieu of flowers: https://www.gofundme.com/kanai-mukherjee-memorial-fund