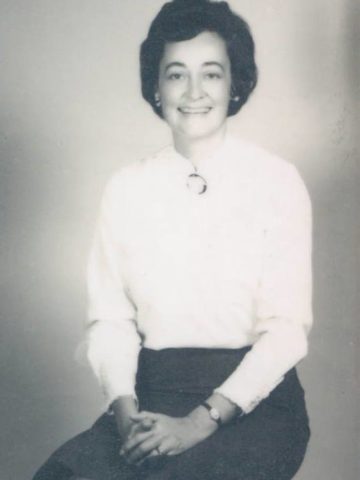 “The mountain was wooded and so my friends and I greatly enjoyed exploring. I vividly remember the day we found a narrow ledge along a steep drop-off which we climbed along and found at the end a huge cave with a fresh spring of water in the back. It also contained the remnants of a 2-storey building which we later learned was a hide-away for robbers!” This is one of the memories of Ruth Cooley, who lived a long, full, and interesting life as a missionary child and wife.

Ruth was born in 1925 in the town of Penghsien in Szechwan Province of China to Rev. George E. Rackham and Nellie Tait Rackham, Canadian missionaries who served in West China from 1920 to 1949 under the United Church of Canada. Ruth and her elder sister, Nan, were sent away to be educated at the Canadian Missionary School in Chengtu. In 1942, with Japanese bombing becoming too dangerous, her parents sent Ruth and younger sister Joan out of China to India. Unaccompanied, they travelled in the back of a coal truck to Kunming where they found passage with the American airmen known as the Flying Tigers who flew DC-3s over “the hump” of the Himalayan mountains to Calcutta. In India, they travelled by train to the mountain town of Mussoorie where Ruth completed high school at Woodstock School. In 1943, Ruth travelled with her parents and Joan by US troop transport ship from Mumbai to NYC via the Sunda strait, around Australia, across the Pacific (“zig-zagging to avoid enemy submarines”), through the Panama Canal and up the East Coast.

Back in Canada, Ruth entered college earning a BA degree from University of Toronto followed by a year at the London School of Economics. Being of adventurous spirit, she travelled in Britain and Europe. She spent a month in the summer of 1952 at the University of Fribourg in Switzerland studying French. Wanting to visit friends in Berlin and lacking funds, she decided to hitchhike. She was picked up by an American who “said I was an idiot for hitchhiking on the Autobahn so soon after WW2.” Her postcards home to Canada did not mention these adventures!

In 1954 she married Rev. Dr. Frank L. Cooley, an American missionary who had endured months of house arrest with Ruth’s parents in Chungking during the Communist revolution in 1949. She described it as an “arranged marriage” of sorts because Frank and her parents were so close. Together, Ruth and Frank spent the next 20 years serving in Indonesia where three children were born, Kirk, Martin and Monica. Returning to the US in 1973, Ruth and family lived in Salem, OR; Woodbury, CT (where Ruth built a 100% passive solar house); Atlanta, GA; and Westminster, SC. In 2007, she moved to Nashville, TN to be closer to daughter Monica. Her interests in retirement included gardening, sewing, knitting, baking, and reading. An avid reader mostly of non-fiction, Ruth would order up to 5 books a month from bargain book-sellers, read them and then try to pass them off to Kirk and Monica. An elegant woman, always impeccably dressed, she did not mind getting her hands dirty in the earth. But she did find it hard to get old, especially when it involved hearing loss and losing her independence.

With a strong faith in the Lord, she passed peacefully into His hands on June 13, 2020, one day after her 95th birthday. She is survived by her sister, Joan; her children, Kirk, Martin and Monica; daughter-in law, Sharon; son-in-law, Sankaran Mahadevan; and cat, Cleopatra.