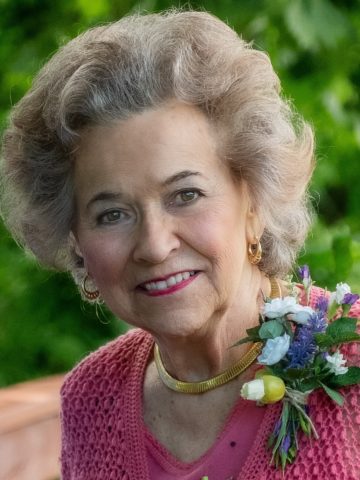 Linda Lou Hensley Fields was born on September 23, 1935, in Lawrenceburg, KY. She went home to be with the Lord, on August 28, 2019, in Nashville, TN, at the age of 83. She was devoted to putting the love of Christ into action.
Linda graduated from Anderson County High School and Transylvania University in Lexington, KY with a BA in Speech and Drama. She served the following summer with Red Bird Mission conducting Vacation Bible Schools for children in Appalachia. She was a member of the Transylvania Robert Barr Society and received their Distinguished Achievement Award in 2011, awarded to alumni who embody the ideals of their alma mater through their professional accomplishments, standards of excellence, and service to their communities.
Thereafter, she entered Southern Methodist University Perkins School of Theology. As part of her graduate program, she served as Summer Youth Director at First United Methodist Church in Galveston, TX, where she met a medical student singing in the choir. After receiving her Master of Religious Education Degree, and he received his Doctor of Medicine degree, she married her sweetheart, Jim, on May 30, 1958.
While Jim served his medical internship in New Orleans, Linda was consecrated as a Certified Director of Christian Education and served as such in a local United Methodist Church. The couple moved to Staten Island, NY where Jim started residency training and she worked as a substitute teacher. After completing post-graduate courses in speech correction and therapy at Columbia Teachers College, she taught high school students with special needs and home-bound students. As one of the top 100 teachers in the city, she was hired to work with troubled high school students. She served as Lay Leader in a local United Methodist Church on Staten Island. In 1976, she received a Community Service Award “For sustained work and involvement with the resettlement and assimilation into the mainstream of American life of more than 50 refugees and immigrants from other countries.”
After moving to Nashville in 1978, she continued her teaching career as a substitute teacher at University School of Nashville. From 1984 through 2004, under The United Methodist Volunteers in Mission Program, she and Jim participated in, coordinated, and led comprehensive medical/surgical/education teams in the developing countries of St. Vincent and Grenada, West Indies; Mexico; and Brazil. During each annual two-week period, thousands received faith-sharing; a wide variety of general and specialty medical, dental, and surgical care; free medicines and eyeglasses; and in-service training for local nurses. Her love for the people of Saint Vincent was pervasive. She was always looking for opportunities to meet needs and solve problems of those she met there. Children with deafness heard for the first time when she recruited an audiologist and obtained donated hearing amplifiers. Deaf children sang songs of praise for the first time when they could be included in worship through sign language. Youth with special needs found dignity when they were able to start and sustain a screen printing and T shirt business when she found the equipment for sale and arranged to ship it to Saint Vincent. In one district in Saint Vincent, she met a teacher who was trying to teach without the benefit of books. No child from that district had ever been able to pass the government entrance exam to attend secondary school. Linda petitioned schools, libraries, and anyone who would listen to donate books. TONS of textbooks were shipped to schools; libraries were established, and shelves filled. Students began to pass their exams and were able to attend secondary school. Another of Linda’s passions was traveling from school to school with new toothbrushes and fluoride gel, providing preventative treatments to children and their teachers.
In addition to overseas mission service, Linda lectured at many churches to raise funds to help bring nine persons from developing countries, five children, two young mothers, and two young men, to the United States for life-saving/life-changing surgeries not available in their country. She also quietly provided funding for several students who did not have the resources needed to attend school in Saint Vincent.
Linda was a member of Belmont United Methodist Church where she sang in the choir and served on The Administrative Board and numerous committees. She loved her involvement with the members of the Golden Triangle Congregation, where she provided love and assistance to those who have resettled to Nashville.
Linda was preceded in death by her parents, Dr. Robert W. and Mary Elizabeth Cox Hensley (Lawrenceburg, KY); Uncle, John T. Cox II (KY); Cousin, Lydia Hodson Copeland (KY); Grandson, Isaac Walden Harness (Knoxville, TN).
Linda is survived by her loving husband of 61 years, Dr. James Perry Fields (Nashville, TN); Son and Daughter-in-law, Timothy Austin (Jo) Fields (Nashville, TN); Daughter and Son-in-law, Amy Elizabeth Fields (Patrick) Buxton (Powell, TN); Granddaughter, Kelsey Elizabeth Fields (Boone, NC); Grandsons, Jesse Robert Harness (Powell, TN); and Stephan Perry Harness (Pottersville, NY); Aunt Mildred “Mickey” Cox Hodson (KY); Cousins, Mary Jane (Davis) Briscoe (KY); Jeff Hodson (CA); and a host of other extended relatives.
Linda was dearly loved by many, and will be greatly missed.
A Celebration of Life service will be held for Linda on Saturday, September 7th, 2019 at 11AM at Belmont United Methodist Church, Nashville TN. The family will be receiving friends from 10-10:45 AM in the Iris Room.
In lieu of flowers, it is requested that donations be made to Belmont United Methodist Church, The Golden Triangle Fellowship of Belmont United Methodist Church, American Leprosy Missions, or Red Bird Mission.