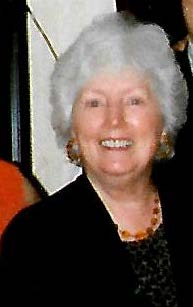 Departed on November 16, 2018 and resided in Nashville, TN

Margaret Lamb, age 89, died on Friday, November 16, 2018 at the Brookdale Senior Living community in Nashville. She was born in Middlesbrough, England to Margaret and Frederick Hugill.

Margaret was preceded in death by her parents, her sister Molly, her brothers Arthur and Jack, and her husband, Clendon Lamb.

While living in England, she survived being bombed by the Nazis, she danced with the Romani, and she eventually met the love of her life, Clendon Lamb, a Major in the United States Air Force who was stationed in the UK after WWII. They moved to the United States in 1956, and lived at several different Air Force Bases before choosing to retire in Nashville, TN so that they would be close to their daughter and grandchildren.

Margaret never met a stranger. All you had to do was spend five minutes with her, and you had a fast friend. She was entertaining and fun, but she was also a thoughtful listener who was willing to give you the perfect advice if you were struggling. Simply put, she was a lovely woman who touched the lives of the people around her in the most profound ways. Once you met her, you were changed for the better.

Margaret is survived by her daughter, Clarissa Pierce, her son-in-law, Douglas Pierce, her grandchildren, Scott Pierce and Valerie Imhoff, and her grandson-in-law, Jakob Imhoff. Private family service to be held.