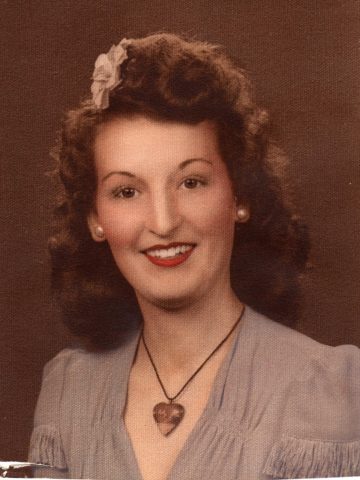 BAIRD, Myrtle Colleen “Polly” age 93, departed this life on March 26, 2018. Her life was devoted to her husband, children and grandchildren. She was a mother to three boys and one girl and numerous other children over the years. She attended Yellow Creek School in Houston County and played on the basketball team. She held numerous other positions as well. She was a Lifetime PTA member, taught Sunday School for many years, Mother of the Year for the In Home Demonstration Club, a 50 year Eastern Star member, wrote poetry and short stories, received many gold stars for letters to the Editor of the Tennessean. She worked several years during the war at a defense plant making airplanes.
Myrtle is preceded in death by her husband, James H. Baird; mother and father, Joe and Stella Adkins; brother, Joe W. Adkins; son, Gerald “Jerry” Baird.
She is survived by two sons, James “Jim” (Linda) and Randy Baird(Ann) and one daughter, Dora Baird Ferrell(Wayne); nephew, Larry Joseph Adkins; several grandchildren and several great-grandchildren.

A Celebration of Life will be held Saturday March 31, 2018 at 1:00pm at West Harpeth Funeral home. Burial will follow the service at Woodlawn Memorial Park.