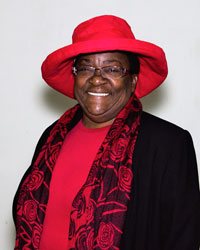 Departed on July 23, 2020 and resided in West Nashville, Tennessee

Patrice Leith Inez Gaulle Ward beloved wife, mother, sister, aunt, friend, and woman of faith departed this life unexpectedly on Thursday afternoon, July 23rd, 2020 at the age of 69. She was the oldest of two children born to Reginald (“Bobby”) Gaulle and Emmeline Cave Gaulle in Brooklyn, New York on October 20th, 1950. Preceding her in death were her parents and niece (Nicole Gaulle).

Patrice, known as Patty during childhood and Pat during adulthood was born on October 20th, 1950. In her infancy and early grade school years she resided with her parents in a small apartment on the top floor of her grandparents’ busy and love filled Brooklyn Brownstone. Patty was Grandpa Joseph Cave and Grandma Inez King Cave’s fifth grandchild and 2nd female grandchild, but she was the first girl grandchild to be born to one of their daughters. Patty’s grandmother and aunts immediately embraced her, and that small apartment became the epicenter for much of the activity in the house. In time Patty took over the whole house and left no heart untouched. This was a house in which life was embraced and celebrated and Patty and later her brother Reggie were always part of that celebration. There were aunts living in the house, uncles visiting, cousins visiting/sleeping over, church members visiting, holiday celebrations, piano playing, singing, talking, planning, sisters exchanging recipes, cooking, eating and much laughter. Joseph and Inez and their family were active participants in Brooklyn’s Bethel SDA Church and every Sabbath, sitting in the front pew you would find Grandma and Grandpa accompanied by Patty, Reggie, Emmeline and varying cousins, aunts and uncles. Faith was an integral part of this on-going celebration of life and the cornerstone of Patty’s life.

In 1958, the Gaulle family left Grandma and Grandpa’s house in Brooklyn and moved into their own home in St. Albans (Queens), New York. Schools were better in St. Albans and their small home had the perfect porch and backyard for children, cats and miniature schnauzers. Patty and her family became active congregants in the Jamaica Seventh Day Adventist church, with frequent visits back to Brooklyn to attend church with Grandma and Grandpa. There were piano lessons, violin lesson’s (using her Uncle’s violin), voice lessons, learning to sew, knitting and crocheting with cousins and friends. The epicenter for the celebration of life expanded to include the Gaulle house. Grandparents, cousins, aunts, uncles, old friends and new made their way to St. Albans. Despite all of this activity, attention to school and homework was mandatory. All of Grandpa and Grandma’s children had graduated from college and the same was expected of the grandchildren. Patty transitioned into adolescence and young adulthood becoming Pat. As a church choir member and accompanist, she began to embark upon what would become her lifelong ministry of music. Her energy was boundless as was her ability to enjoy life. She was a serious person, attuned to the world’s injustices, as well as the pain experienced by her friends and people in general. Her ability to experience the joy to be found in each day permeated her being. This ability and her laugh were often the salve that soothed that pain and brought perspective to the injustices incurred in everyday life.

After graduating from Andrew Jackson High School, Pat joined the class of 1972 at Penn Morton College in Chester Pennsylvania. This was the civilian and coeducational component of PMC Colleges (Pennsylvania Military College was the other component). These two components made for an interesting experience. Pat was a member of CAPERS (coed affiliates of Pershing Rifles Q-15), CAPERS was a relatively new competitive girl’s drill team sponsored by the top rifle team in the country. Drill teams perform in silence (no cadences are called); it is a combination of internalized rhythm and knowing what your team members are doing. They practiced every day for one hour. In competition, the team frequently finished in the top three. Pat was also a news staff member for the school newspaper the “Dome”. She wrote articles and co-authored an advice column entitled “The Scarlet Women” or “Notes from the Scarlet Women “, with her roommate. Her roommate Lillian Lloyd, who remained a lifelong friend, described it as an advice column written by two very naive young ladies. Their column sign-off was often “snuggle don’t struggle”

After earning her Bachelor of Arts in English Pat returned to her home in St. Albans and used her writing abilities while working for a variety of service agencies including Covenant House. Her jobs often involved exposure to heart breaking and difficult situations, but she used her appreciation for life, sense of humor and faith to find the best in most situations. She expanded her activities in the Jamaica SDA congregation becoming a choir member, accompanist, performer, cooking/catering and serving in innumerable ways. Her musical ministry extended beyond the Jamaica SDA congregation, she participated in and directed other choirs along with participating in gospel choirs.

She always knew that she wanted a good marriage and children. She believed in patience. During a trip to Barbados Patrice met her true love but it was not their time. Years later, Clyde Ward re-entered her life and proposed. So began her own personal fairy tale. On November 14th, 1982 in Bethel SDA Church Patrice and Clyde were married (the same day as her parents in the same church). She wore her aunt Leith’s wedding dress with pieces of lace from her Mother’s dress. Her bridesmaids and groomsmen were her cousins, as was the case in her parent’s wedding. Clyde and Patrice were pronounced “Man and Wife” at almost the same time as her parents. The St. Albans home added Mr. and Mrs. Clyde Ward as residents. As with her parent’s, she remained in love with and married to her husband Clyde until her death. She would say “we are happy as two peas in a pod”.

The fairy tale continues. Clyde and Patrice’s daughter, Marjorie, is born on Christmas Day, December 25th, 1986. Pat’s grandmother Inez celebrated her birthday on Christmas Day. The tradition of Christmas food and birthday cake would be taken up again, this time in St. Albans. Just as Pat’s arrival brought a bevy of people and love to the Grandparents home in Brooklyn, Marjorie’s arrival brought, aunts and uncles, cousins and friends to the St. Albans home. Pat and Clyde settled into their roles as Marjorie’s parents and Emmeline and Bobby settled into their roles as Marjorie’s grandparents.

Pat’s brother Reggie and his family lived in Nashville. And in 1995, Pat’s mother and father relocated to Nashville TN with Pat, Clyde and Marjorie following in 1996. Pat worked at Fisk University as the Assistant Director of OSRP. Eventually, Pat, Clyde and Marjorie moved in with Pat’s parents. This brought the Gaulle family back under the same roof. Pat’s parents would be able to see both of their children and their respective spouses and grandchildren. Proximity made celebrating life easier. Pat and Reggie’s parents, Pat, Clyde, Marjorie, Reggie, Tricia, Bryan, Nicole and Owen all benefited from being embraced with faith, education and love and so the intergenerational celebration of life continues uninterrupted in a new location.

Emmeline, Bobby, Pat and Clyde became members of the first Nashville Seventh Day Adventist Church. The choir was a major part of their lives. Pat and Clyde served on many committees. Without hesitation, Pat stepped up as called. The choir and playing the organ for church events were dear to her heart. Her musical ministry included encouraging others to have faith in their musical abilities. Anyone who spoke with Pat understood the importance of her church family and the joy they brought to her was readily apparent.

In October 2017 Pat and Clyde entered into another of life’s cycles, Parents of the Bride. Marjorie and David officially became engaged. Thanksgiving would be spent in Savannah and Christmas/Marjorie’s Birthday would be spent in Nashville. This mean recipes and cooking and joy. Pat’s words “Me, mom-of-the bride? Who’d-a-thunk-it”
These were words of joy. On December 1, 2018 Marjorie, wearing a gown she designed and sewed, became Marjorie and David joined the Gaulle-Ward’s ongoing life celebration.

Pat began to contemplate retirement from Fisk University. Pat had a dream and had found partners who shared that dream. In addition to work and church, Pat began to work on Leviticus, LLC. She and her partners were preparing to secure a food truck. Without neglecting her work, family friends or faith, Pat embarked on making that dream come true. With her usual boundless energy, she and her partners began the involved process of securing and setting up a food truck which would be called Leviticus. Each year brought them a little closer to realizing the dream. This would be the only dream she did not fully realize. Early in the morning, Wednesday, July 22nd, 2020, Clyde took Pat to the hospital. Her faith, passion, optimism and seriousness dictated that she takes along a few new recipes to review for the Leviticus menu. During the early afternoon of Thursday, July 23rd, after hearing her daughter’s voice, and in the presence of her husband and brother, Patrice Leith Inez Gaulle Ward, surrounded by love and with dignity and grace, relinquished her life on earth.

She will be missed and always loved by her family, church family, her many cousins and friends spread across the country and world.

~Until We Meet Again~

In lieu of flowers, the family requests that donations be made to Nashville First Seventh-day Adventist Church in Pat Ward's honor.