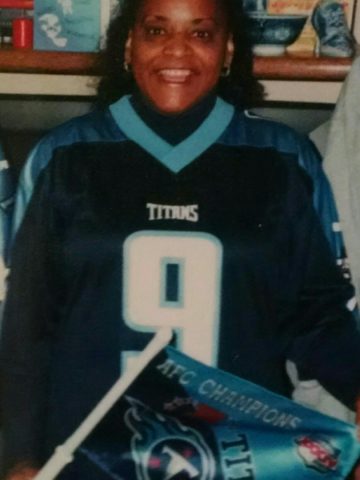 Departed on August 15, 2017 and resided in Antioch, Tennessee

Patricia Yvonne Johnson Duncan was born November 13, 1949 to the late Birdie Mae Johnson in Nashville, Tennessee. She passed away on Tuesday morning, August 15, 2017 at 67 years of age. She was the youngest of five children, with two sisters and two brothers.

Patricia was educated in the Nashville Public Schools, graduating from Pearl High School in 1968. She received a B.S. in Home Economics from Tennessee State University in 1972, and an M.S. in Social Work with a Gerontology specialization from Fisk University. Patricia married David Duncan in New York in 1975. She worked for a few years as a social worker prior to the birth of her children, David Jr. and Sean. She became a homemaker after her oldest son, David Jr., was born.

Patricia was very artistic, and could draw and paint most anything. Her creative and artistic ability were reflected in her home that was beautifully decorated. She enjoyed arts and crafts, cooking, scrapbooking, and sewing.  It was important to Pat to make her home comfortable and attractive for her family. She was a devoted mother who frequently volunteered at her children’s school. She attended her sons’ performances in the concert and marching bands they played in throughout their school years. She was also active in supporting them in their Cub Scout activities.

Both of Patricia’s sons are musicians, in addition to working at their regular jobs. Pat supported their performances, and went to hear them play as often as possible.  She was devoted to her family and showed unwavering love to her husband and sons.

In 2005 and 2007, Patricia suffered strokes. While she did not initially exhibit signs of having had the strokes, she began to have symptoms of dementia in 2011, and was diagnosed with the illness in 2012. In spite of her illness, she seemed happy because she had her devoted husband, David, looking after her care. David cared for Pat until he passed on June 10th. Although her illness became more challenging as time passed, her symptoms became more debilitating after David’s passing. She struggled for the two months after his death but never was able to regain her previous level of functioning.