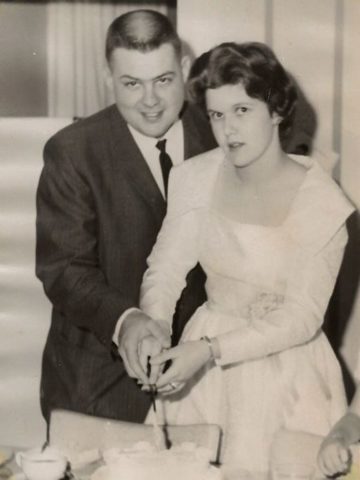 Reba Faye Lowe Edlin, a faithful Christian who is now in the arms of her loving Heavenly Father, was born December 15, 1941 in Nashville, Tennessee. She left this earth on August 25, 2020 and was reunited with her parents, Augustus Eugene Lowe and Eula Myrtle Spicer Lowe and her loving husband of 54 years Boyd Russell Edlin. Reba is survived by her daughters Maria Edlin King (Ronnie – whom she adored) and Cathy Edlin Ivey, her sister Myra Diane Lowe Simmons, her sister-in-law Darothy Ann Bumpus Edlin and many nieces, nephews, cousins, and friends including the church at Kingston Springs and the community of Pegram where she lived for 56 years. A memorial service will be held in the spring of 2021 after the worst of the pandemic is past because Reba would never have wanted someone she loved to be in danger of becoming ill. Her earthly remains will be cremated and scattered, along with Russell’s, at a later date. In lieu of flowers consider making a donation to A.R.E., the non-profit foundation to which she spent many years being Grandma Duck (A.R.E. C/O Maria Edlin King 7430 Sugar Camp Hollow Road Fairview TN 37062 or campproject.org)