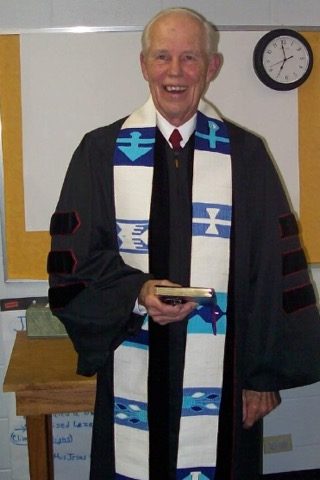 Departed on June 11, 2019 and resided in Nashville, Tennessee

Rev. Dr. Julius Harold Jackson was born on December 4, 1927, in New Orleans, Louisiana. He served in the 10th Mountain Army Division in Colorado 1946-1947 and then graduated from LSU and Union Presbyterian Seminary in 1954. He was ordained to the Ministry of Word and Sacrament by the Presbytery of Louisiana on July 18, 1954.  He served churches in Louisiana and Arkansas and was called into ministry in administrative leadership in the Presbyterian Church, first as Regional Director of Christian Education for the Synod of Arkansas (1966-1973), then as General Presbyter for North Alabama Presbytery (1973-1980) and as Executive of the Synod of Living Waters in Nashville (1979 – 1997).  Rhodes College in Memphis, Tennessee honored his ministry by awarding him an honorary Doctor of Divinity degree in 1982.

In his ministry, he was an advocate for the civil rights and inclusion of all people in the church.  He was known for his creative approaches to leadership and enabling all of God’s people to live into the variety of gifts with which God has blessed them.  In his preaching and teaching, he wanted people to know that they were loved by God and living in this love, each person has a call in their life “to do justice, embrace faithful love, and walk humbly with God. “(Micah 6:8, Common English Bible)  One of the things of which he was most proud of was the work of Living Waters for the World which works to ensure safe water for people in need all over the world.

Harold learned to ski thanks to the army and enjoyed downhill skiing for many years until he retired at 82.  He liked to jog around the neighborhood and was the unofficial chaplain for River Plantation neighbors.  He loved planting hibiscus and training mandevillas to grow and listening to music of all kinds. He and Lizabeth (as he loved to call her) ate dinner and watched the PBS News Hour which kept him very current on world events.  Watching the Cubs and the college world series kept him going until August when football began and then September when he could watch his beloved LSU tigers play.   Visiting with his children, grandchildren and great grandchildren by phone, Facetime or in person always brought a smile to his face and a twinkle in his green eyes.

We are grateful to the staff of Barton House and Avalon Hospice for their gentle, wise and deeply loving care for Harold in the last months of his life.  We are also thankful for the pastoral staff and pastoral care team of Westminster Presbyterian Church who have been faithful in their visits.  We are surrounded by so great a cloud of witnesses of friends and neighbors and we are thankful for their presence in our lives. Lib is especially grateful for her children and grandchildren who have called and visited; and for her sister Cathy and brother-in-law, Lou and her nephews Josh, Russell, and Christopher whose abiding presence have enabled us to live through these last months with joy and happiness.

A memorial service will be held on Monday, June 24, 2019, at 10:00am, at Westminster Presbyterian Church (3900 West End Avenue). Visitation with the family will follow the service in the church parlor.