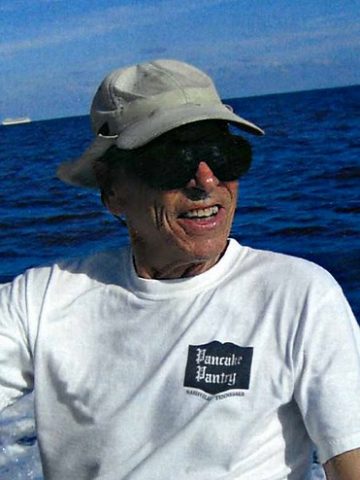 Bob graduated from Marion Military Institute in 1944. He served in the United States Navy, QuarterMaster Third Class, in the Atlantic and Pacific. He attended the University of Florida (hitchhiking to visit the Florida State College for Women at every opportunity,) Stetson University, and ultimately graduated from the hospitality and restaurant program at Cornell University. Instead of attending commencement, he married the beautiful Jane Mathias of New York City. Following in the footsteps of his grandmother, Florence Baldwin's boarding house and his father's diner, Bob worked in the food industry in Tampa and Philadelphia, before moving to Nashville in 1957.

In 1961, following a handshake with friend Jim Gerding of Gatlinburg, Bob opened a little restaurant called the Pancake Pantry in Hillsboro Village. His goal of good food and good service at a reasonable price was the foundation on which the international icon is still luring lines around the block today. The legendary music business tables pushed together in the back served names known by all, every morning from 7-9:00AM. Bob enjoyed employing his family and numerous other extended family members over the years. All employees were like family; many with decades-long tenure. He was ahead of the times, opening a short-lived second Pancake Pantry location on 4th Ave in Downtown Nashville in 1965. The Pancake Man partnered with his son, David, in 1978 and sold the business to him and retired in 1988.

In retirement, Bob traveled the country in his RV, fishing boat in tow and photographing avian sanctuaries. Bob was a lifelong game bird hunter and wild game chef. He held his anticipated Wild Game Dinner gathering faithfully for 40+ years. More than anything, Bob enjoyed the fellowship of his hunting fellows. Mr. B never stayed away from the Pantry for long, always ready to give free advice and direction. Bob moved himself into independent living at Park Manor in 2014, where he continued his penchant to offer advice and direction.

Bob Baldwin was the perpetual class clown, had an extra helping of humor and wit, and NEVER met a stranger. He loved Nashville and truly felt the love in return.

No service is planned at this time. Remembrances are appreciated at https://www.westharpethfh.com/obit/robert-s-baldwin/.

Please be safe, be kind to all, vote, wear a mask, wash your damn hands, and EAT MORE PANCAKES.