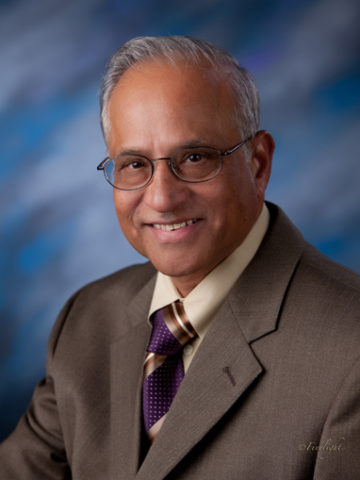 Sudhakar Rao Gade , son of Gade Laxman and Venketamma Rao, began his life’s journey in a small village, Huzurabad, in Andhra Pradesh India. Sudhakar’s grandmother influenced him greatly during his early years and ruled the household with a stern but loving hand. She taught him that with hard work and dedication he could achieve any goal in life. He set his sights on becoming a physician and was accepted into Osmania Medical College in Hyderabad, India. During his medical school years he formed friendships that would last throughout his life. These special people became his family away from home.

After his graduation from Osmania Medical College in 1968, he was introduced and married to Aruna Alladi. This began their forty-eight year journey together that brought them together. From that day forward, he was never alone, for she was always at his side. She was a source of quiet strength for him, helping him in all aspects of his life. The two of them together were like two halves of a whole, one complementing the other.

Sudhakar settled down to practice General Surgery in Savannah, Tennessee, where he would serve his community and his patients for the next 38 years. He was dedicated to serving others by healing with his gifted hands and kind heart. In addition, he served his community through his participation with the Rotary Club. He and Aruna raised their children, Saritha, Kavitha, and Rajesh in Savannah. He was blessed to see his two daughters married in his lifetime, Saritha to Nimin Jairaj Pothuluri, and Kavitha to Mohan Veerabhadra Tadikonda. He was also blessed with three beautiful grandchildren, Aneal, Dhilan, and Devan.

Anyone who knew Sudhakar well, knew that his passion was Indian classical music. He spent countless hours studying and practicing classical music under his Guruji, Dr. Sankaran Mahadevan, who enriched his life immensely with his teaching. If he was not singing, he was listening to music. Every week he would make the two and a half hour drive to Nashville to attend music class. Even when life took him

unexpectedly to Florida, he continued his music lessons even by telephone. Sudhakar especially enjoyed singing at special occasions with his medical school friends.

Sudhakar Rao Gade was a deeply religious man, who was not concerned with material things of this world. He believed that serving God was first and foremost in his life. He kept God in his heart always and His hands guided him through his life. His radiance and joyful smile placed everyone at ease with him. All who knew him felt he gave wise counsel. We say goodbye to his beautiful soul with great sadness but take solace that we know he is now with God.