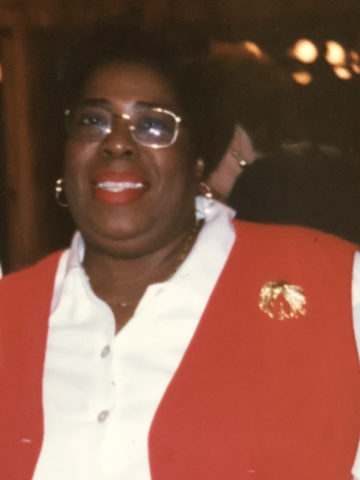 Departed on May 2, 2020 and resided in Nashville/Bellevue, TN

Vivian Janet McCoy - Hughes was the eldest child born to James Russell and Addie McCoy on January 24,1943 in Harlem, New York. She adored her younger siblings and loved being a big sister (momma) to her siblings. Vivian spent her summers with her grandmother in Virginia. She looked forward to every summer listening to the wisdom of her grandmother and cooking (learning new recipes). She would later share them with her children in her tin of recipes.

Vivian majored in Typing and Business Machine Operation in High School. Her goal was to make it to IBM school. She graduated from Grace H. Dodge Vocational High School in 1960 in Bronx, New York. To her friends, her nicknames were Vi, Viv, and Vicky.  She was known to be “One of the nicest, sweetest girls around. A riot in everybody’s book”, and it will forever hold true. She went on to attend LaGuardia Community College in Brooklyn NY.

Vivian meet Gene Hughes in Harlem, New York through a mutual friend. They were married August 18,1962 in Brooklyn, NY. Afterwards they made their home in Brooklyn, New York where they raised their children in a house full of friendships, music, laughter and love. Her house was always aglow with music and she instilled the love of music in her children.  Vivian’s favorite time was turning the music up so loud that all of her children would wake up dancing, just in time to get the house cleaned for the week, every Saturday morning. You would think they would sleep in, but the movement in the house was too much to simply stay asleep.  She developed a wealth of friends and she and her family were truly rooted in her community. Her home was a place of fellowship, where family and friends would gather.

Vivian was baptized as one of the Jehovah’s Witnesses on April 11, 1976.  She attended the Van Dyke congregation in Brooklyn, NY and developed lasting friendships.  Her congregation grew and she and her family were transferred to the Sheffield congregation where it blossomed more Christian associates. She was a devoted Christian to the very end. She spent her time serving Jehovah to the fullest and continued to be pillar in the West End congregation in Nashville, TN. Her favorite saying at the end of every discussion was “With Jehovah’s help.”

Vivian spent most of her time working various jobs as a secretary (she could type over 90 wpm), but began working for BMI March 21,1982 in New York, NY. When BMI decided to move her department to Nashville, TN, she and a host of her co-workers made Nashville, TN their new home. Vivian spent the rest of career in Licensing at BMI and gained tremendous joy working for the company until she retired.

Tennessee became her love, but New York will always be her home, and she let everyone know it! Vivian spend her days traveling, serving Jehovah and spending time with her friends and grandchildren (Nana). She attended every dance recital, game and events for her grandchildren. Her family will definitely miss her wisdom, laughter, love and overall presence of their life. Mother, with Jehovah’s help, we will get through this time of sorrow. Until we meet in Paradise.

The Family of Vivian J. Hughes, would like to express our heartfelt appreciation and gratitude for every prayer, act of love, flowers, messages, cards, and kindness extended to us during this season of bereavement.