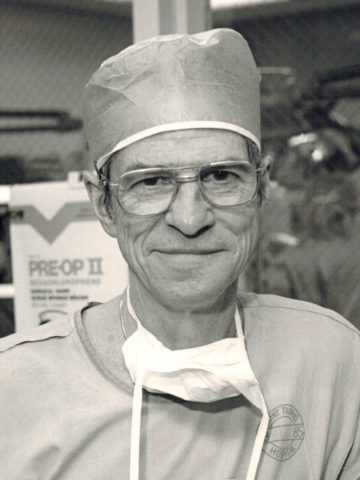 Departed on October 23, 2019 and resided in Nashville, TN

WILLIAM “Bill” HAWKINS EDWARDS, M.D.
Died at home on October 23, 2019
Bill was born on March 16, 1927 in Nashville, Tennessee and is preceded in death by his parents, Dr. Leonard Wright Edwards and Mary Hawkins Edwards Wilson, a brother Leonard Wright Edwards, Jr., sisters and brothers in law Mary Alene Herrington, Dr. John Lynwood Herrington, Jane Hawkins Entrekin, Ervin Morgan Entrekin, Dr. Julia Edwards Sawyers, Dr. John Lazelle Sawyers, son, Norton (Bub) McGaughy Edwards.
He is survived by his wife of 67 years, Frances McGaughy Edwards, son, Dr. William Hawkins Edwards, Jr. (Diane), daughters, Mary Frances Edwards and Sarah Elizabeth Edwards Higgins (Patrick), 9 grandchildren and 6 great grandchildren.
He was the great grandson of Alvin Hawkins the first Republican Governor of Tennessee. He has a rich history of Tennessee physicians in his ancestors. With his great-grandfather, father, sister and two brothers in law he helped shape Tennessee medicine with their state and national leadership.
He attended Wallace School, MBA and Episcopal High School in Alexandria VA. After serving in the Navy in World War II, he graduated from Vanderbilt University and Vanderbilt Medical School. He took his surgical training at Vanderbilt, UCLA Medical Center with a Vascular Fellowship at Baylor University in Houston Texas with Drs. DeBakey and Cooley. He returned to Nashville to practice with his father and brother in law at the Edwards-Eve Clinic. He was a clinical professor at Vanderbilt Medical School and with Dr. Andrew Dale started the St. Thomas Vascular Fellowship in 1969 training many doctors in the art of vascular surgery. It was later moved to Vanderbilt and was known as the Vanderbilt-St Thomas Vascular Fellowship. Dr. Edwards moved his practice to Vanderbilt in 1991 and became the H. William Scott Professor of Surgery. He retired in 1994 as the H. William Scott Professor Emeritus. In his long career he was interested in clinical research, writing, reporting and publishing papers on a variety of surgical interventions and clinical research. He also made several clinical training films. He was instrumental in forming the State Volunteer Mutual Insurance Company in 1976 when medical liability insurance was unavailable in the commercial market. He served on its Board for 18 years and as its president for 10 years. He was a member of the AMA, the Tennessee Medical Association and the Nashville Academy of Medicine as well as serving as president of the Nashville Surgical Society. He served as Speaker of the House of Delegates of the Tennessee Medical Association 1974-1978. He was also a member of the Southern Medical Association and chair of the Surgical Section 1984. He was a charter member of the Southern Vascular Society and served as president in 1996-97. He was a member of the Southeastern Surgical Association and served as president in 1992. He was a fellow of the American College of Surgeons and served as chair of the Tennessee Chapter. He was a member of The Southern Surgical Association and a fellow of the American Surgical Association. He was a member of the Society of Vascular Surgery and the International Cardiovascular Society. He served as president of the St Thomas Medical Staff in 1982. He served as President of the Vanderbilt Medical Alumni Association and the H. William Scott Society. He held membership in the DeBakey Society and the Denton Cooley Society.
He was the consummate teacher and mentor to countless surgical residents and Vascular Fellows. He shared his skill and joy of surgical practice with doctors and nurses wherever he practiced and lectured. He shared his love for travel and superb cuisine with his family and friends. Who could ever forget his Christmas Oyster party or the Boxing Day party? He always shared his love for life with his family and friends.
In lieu of flowers, the family suggests that memorial contributions may be made to Alive Hospice or the Saint Thomas Health Foundation to support The William H. Edwards Endowed Fund for Vascular Surgery Education. Donations to this fund may be made by making a memorial gift online at https://stthomas.ejoinme.org/Donate or mailed to the Saint Thomas Health Foundation at 4220 Harding Road, Nashville, TN 37205.
Contributions to Alive Hospice can be mailed to 1718 Patterson St., Nashville, TN 37203.
The family has planned a visitation at First Presbyterian Church located at 4815 Franklin Road from 10:30 a.m. - 12 p.m. with a service to follow on Monday, October 28, 2019.