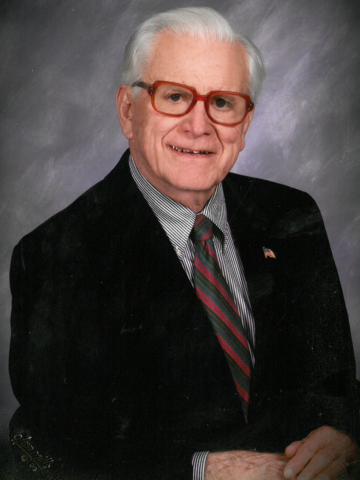 Winfred H. Sharp died on November 1, 2017 at age 95.
He is preceded in death by his wife, Sarah, his father and mother, Ulen and Lena, his sister, Montess, and his brother, Tasso. He is survived by his son, Stephan, his daughter and son-in-law, Winifred and Robert, his grandchildren, Amber and Jade, and his great-grandchildren, Jennifer and Karlee.
He was born in Greenfield, TN in 1922. His education at University of Memphis and University of Missouri prepared him for a career in education. He served in the Navy during World War 2. After the war he settled in Memphis, TN, retiring from active duty in 1954. He taught at Treadwell High School then returned to the Navy for a career at the Naval Air Technical Training Center in Millington, TN from 1954 to 1994, retiring at the rank of Captain. He was a dedicated member of Idlewild Presbyterian Church where he was frequently president of the T. K. Young Class and involved in the More Than a Meal program. He moved to Nashville, TN in 2012. In lieu of flowers, the family asks that donations be made to the More Than a Meal program at Idlewild Presbyterian Church in Memphis, TN.